We woke up at 5:00 in the morning because of the jet lag, got on to the roof top of the hotel again, to see the Acroplis at sunrise. 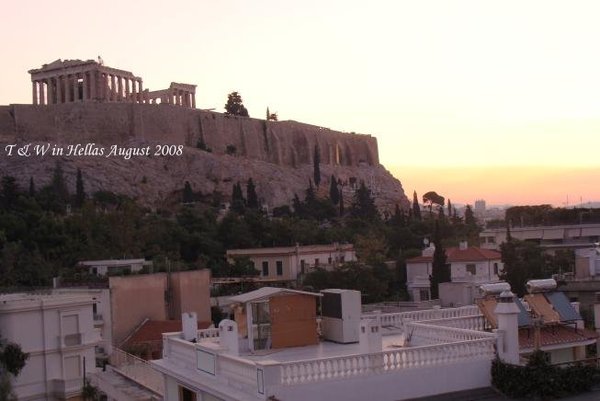 The buffet breakfast in the hotel started at 6:30 am, we were the very first guests. Returned to our room and washed up, tried to catch the opening hours of the Acropolis.


We bought a set of 6 tickets at the ticket booth of the Theatre of Dionysos, I wanted to go right up to the top, Tim insisted we should starting slowly from the base. 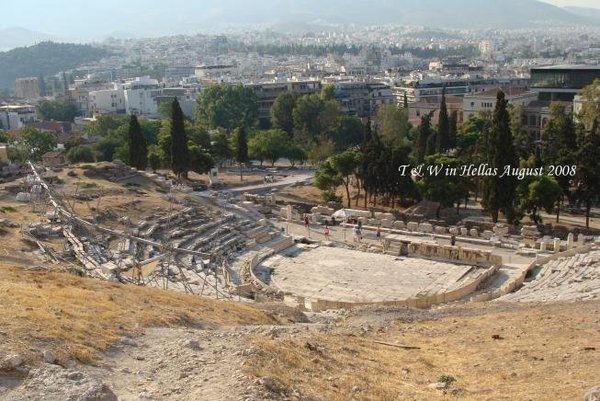 The Theatre of Dionysos, is the most ancient theatre of the world; Built in the 5th century BC. The most famous ancient Greek poets saw premiere performances of their plays preformed here. According to experts, the theatre could accommodate 17,000 people.


Stopped and took some pictures at the Stoa of Eumenes, we reached the Theatre of Herodes Atticus right next to it. 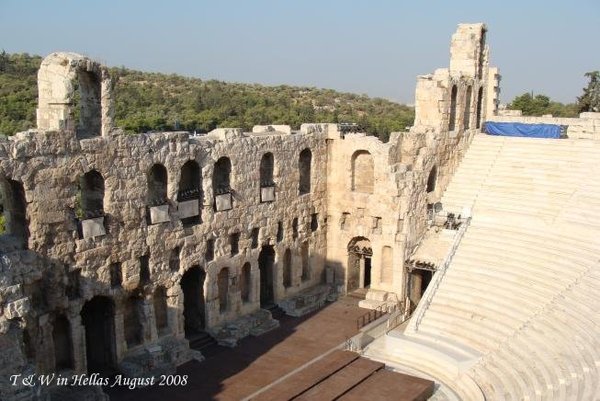 
Spent an hour at the base, we used the second tickets before entering the Acropolis; there were tons of people from the cruise ships and tour groups, they filled up the Acropolis right away. 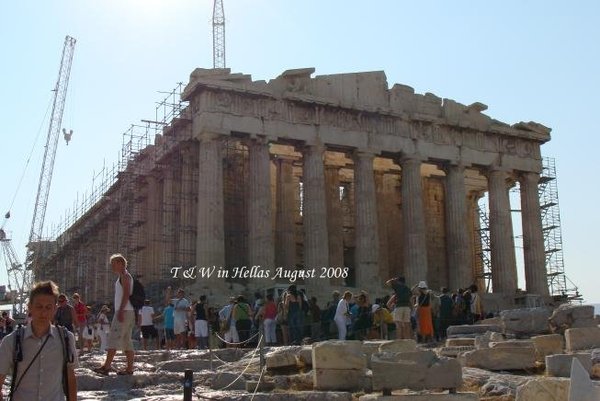 It was extremely intense, when the Parthenon was right in front of us; this temple was built from 447 to 438 BC, and dedicated to the goddess Athena. In 1687AD, the Parthenon was seriously damaged during Venetian attacks on Turkish magazine.


The famous Porch of the Caryatids was there. 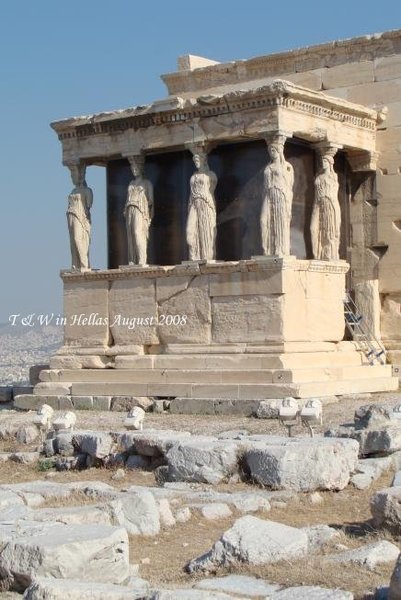 Caryatids supporting the roof of the southern balcony of the Erechtheion. The Erechtheion was constructed from 420 to 406 BC, it was the most holy site of the Acropolis, where thre goddess Athena planted the olive tree which was her sacred symbol.


Although the temple is constantly being restored, it was a spectacular, unforgettable structure. 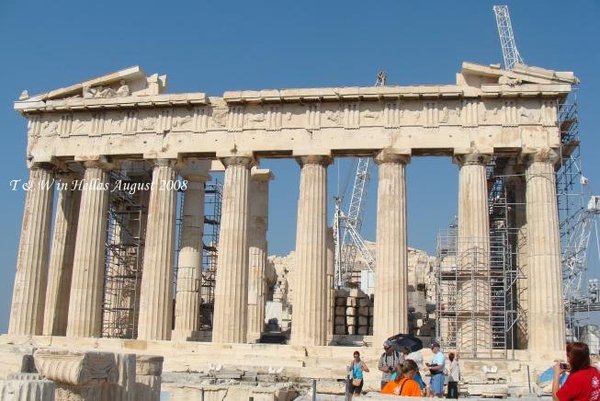 We slowly walked around the Parthenon, particularly experienced the history it had gone through.


We stayed at Acroplis for about one and a half hour, we then went on to the next destination on the foothills of the Acropolis, The Ancient Agora. 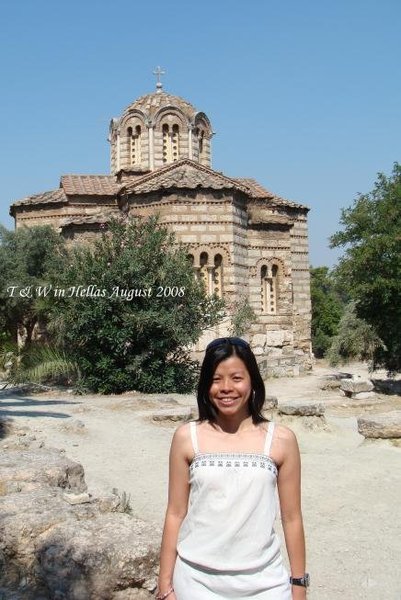 Another Byzantine church 'Ayioi Apostoloi' was the first building we met when entering the site, it was constructed from 1000 to 1025 AD, and was one of the oldest churches of Athens.


The Ancient Agora, was not just a commercial centre, it was a political, cultural and religious centre as well. There are also administrative buildings, temples, public services and courts in the area. 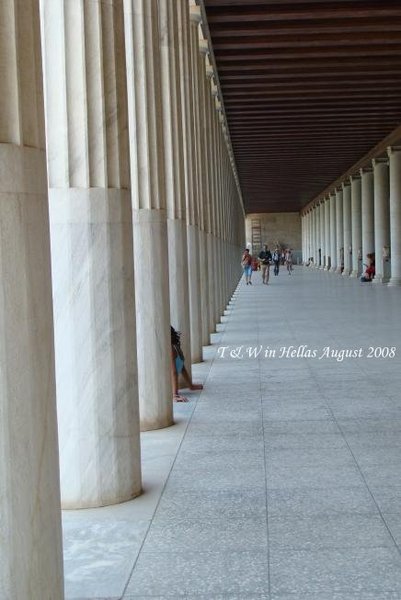 The Stoa of Attalos, the building was donated by the King of Pergamon Attalos II to the city of Athens. It was a ancient commercial centre, it is a museum nowadays, it has the excavations that are unearthed in this area. 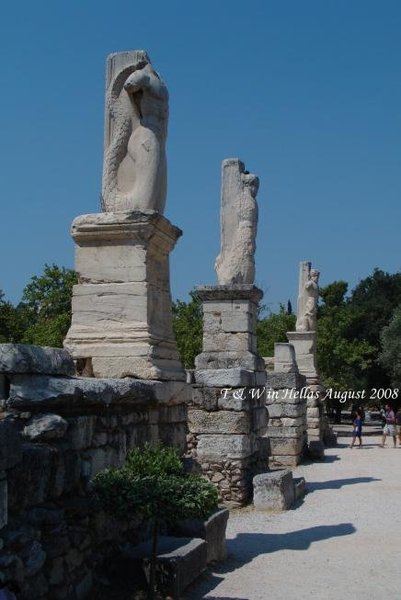 Odeion of Agrippa, there were 3 statues of Giants and Tritons, (there were 4 of them originally).


In Ancient Agora, there was the preserved temple 'Temple of Hephaistos'. 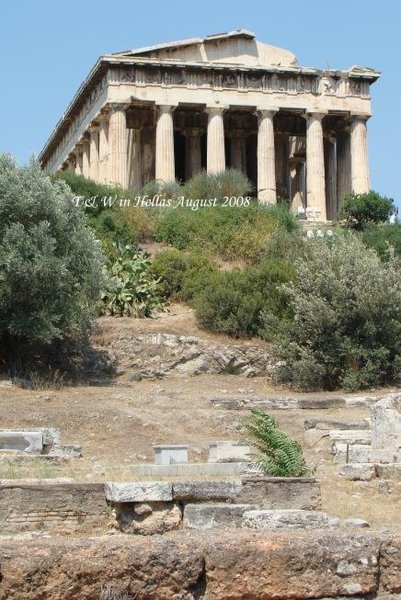 
It was noon when we left the Ancient Agora, we ran into another church when we were thinking where to go next. 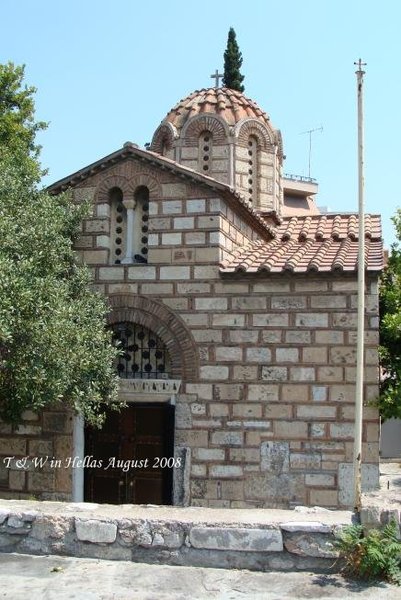 Ayioi Asomatoi, built in the 11th century, it was a cruciform church.


Walked back to the Roman Agora, we had our lunch at a restaurant near Hadrian's Library, and went in the library right after the lunch. 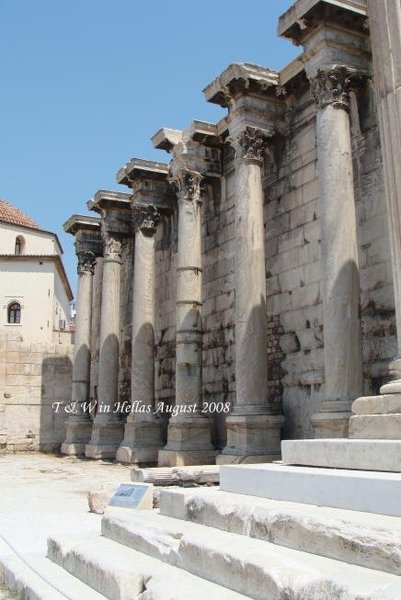 Hadrian's Library was also a site that wasn't recorded in the guides, the information I searched online showed that it was built by the Roman emperor Hadrian in 131 to 132 AD.


Hadrian's Arch was a site that I was planning to visit. 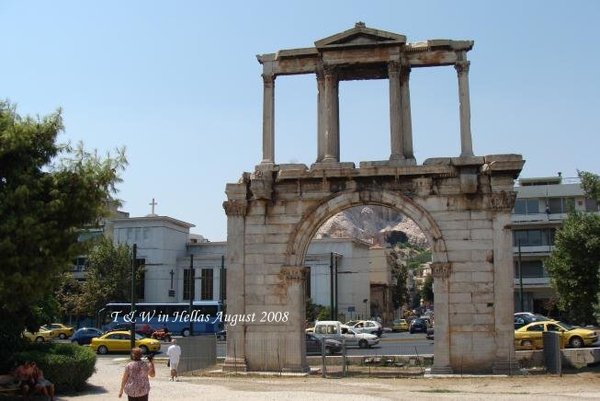 In 131 AD, Hadrian completed the construction of The Temple of Olympian Zeus, Athenians built this arch in honour of Hadrian. 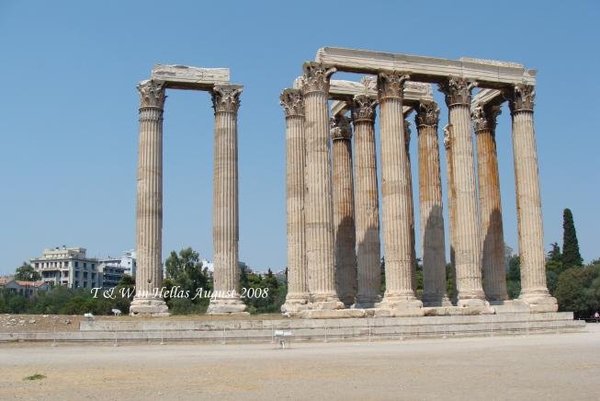 
The temperature was very high at 3:00 pm in Athens, we decided to return to the hotel when we left the Temple of Olympian Zeus. 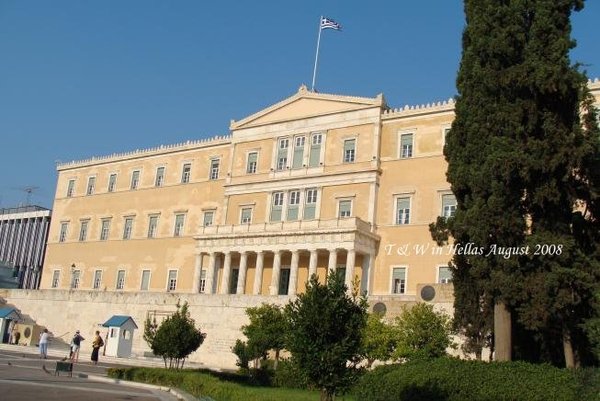 Went out again at 6:00 in the afternoon, walked to the Syntagma Square, it was Athens' central square, side by side the Parliament and the Monument of the Unknow Soldier. 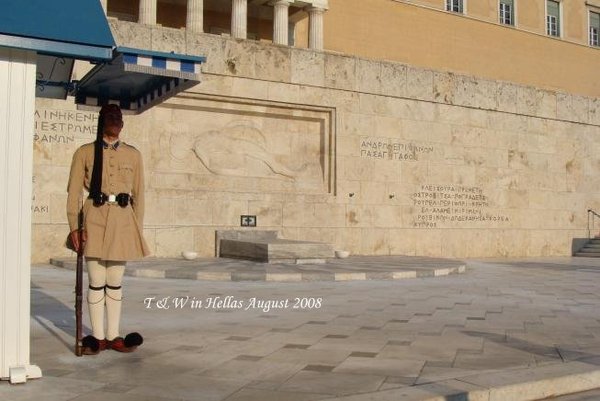 The Monument of the Unknown Soldier was guarded by two Evzones, the ceremony of the changing of the guard took place each hour. It was very close to 7:00 pm when we arrived, so we waited for the ceremony. 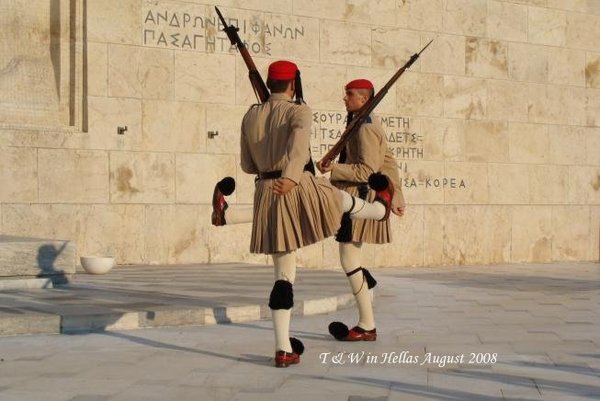 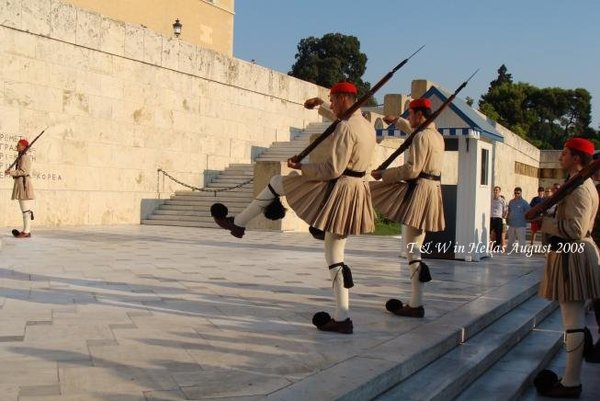 The new guards were going to change.

The old guards left; you could see the sweat on their backs, it is tough to be a guard wearing the traditional outfit in this kind of weather. 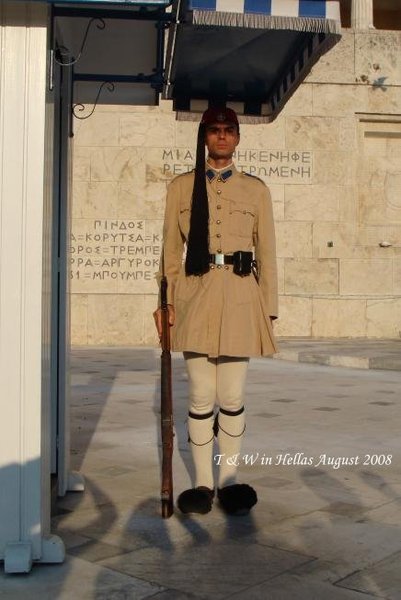 The new guards were in position.

According to the guide, the ceremony at 11:00 am on Sunday, accompanied by a military band and a large regiment of Evzones.


Walked from the Syntagma Square, along the Ermou street toward west, there were lots of shops on the street.

Kapnikarea church is on the middle of Ermou street, it was a cruciform, domed Byzantin church too. The church was constructed in the 11th centruy, and completed in the 13 the century. In 1834, the authorities considered to relocate or demolish the church which was a hindrance to traffic when the construction of Ermou street was happening. The intervention of Ludwig of Bavaria (The father of King Otto), the church was perserved at the present location.


Once again, we walked to Plaka, wandered around the Acropolis area over and over again until the night felt. the sites were opend until 8:00 pm, we sitll had 2 tickets left, we would visit these places when we returned on 16th. We had toasted bread for dinner, then went back to the hotel and started packing up, be prepared leaving for Rhodes Island the next day.