Our flight from Frankurt to Athens was delayed an hour, we arrived in Athens around 2:00 in the afternoon, took the Metro train to downtown Athens, got off at Acropolis station that according to the direction that was provided by the hotel. 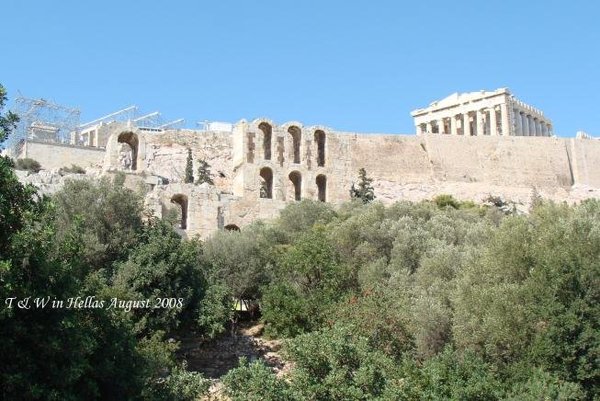 Stepped out the station, tried to figure out where we were, when I looked up, The Acropolis was right there, "Hey Tim, Look!" I said, we both were amazed at what we saw.


Spent some time trying to find the hotel that we were going to stay in for the next 2 nights. The rent was originally $100 Euro per night, when we indicated we would like to pay cash instead of using credit card, we received a 15% off discount right away. 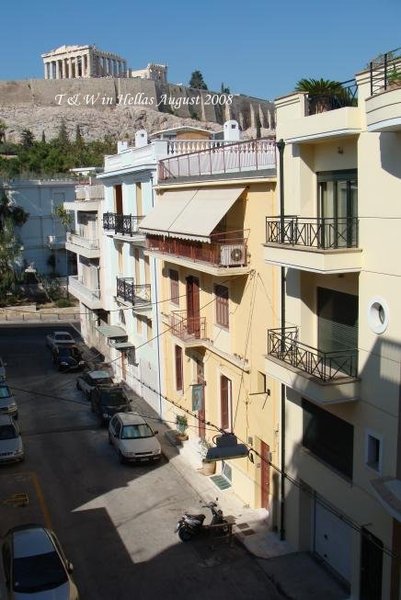 "Plaka, also known as the 'neighbourhoond of the gods,' is the oldest neighbourhood of Athens. In Plaka the air you breathe is different; it is lighter, cleaner, and fragrant, like a gift of the gods."
This is what I read from the travel guide that the Greek Consulate gave me, for that reason, I just conldn't wait to visit and to experience Plaka. Also, I would love to see the Byzantine churchs, which were quite a lot in this area. 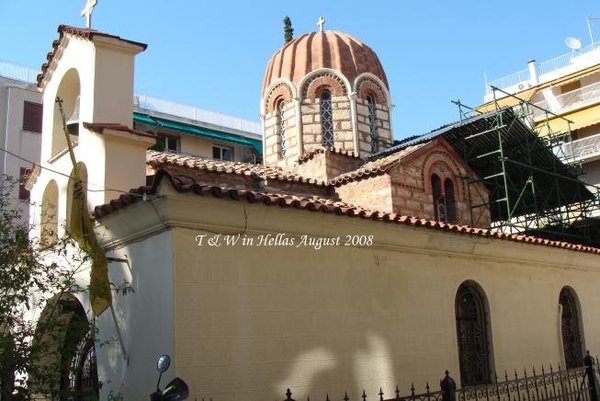 We only had a simple map of Athens on hand, we walked passing by few places that I planned to go on the next day, then we met the very first Byzantine church Ayia Ekaterini which was constructed from 11th - 12th century. Part of the church was under renovation, but it's still a very beautiful church.


We walked around the church, and a Roman Monument site is right beside it, none of the guides we had mentioned this site. 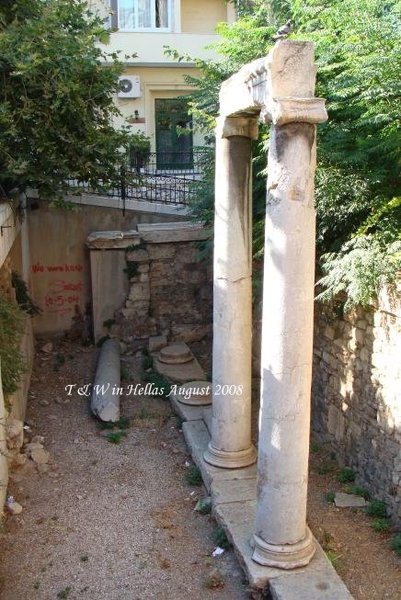 It was almost 6 o'clock in the afternoon, the restaurants on the Plaka narrow streets, were starting set up tables for the busy night. 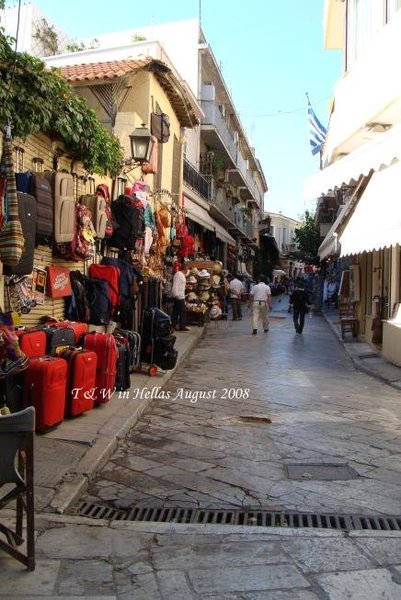 Then, we ran into another story. 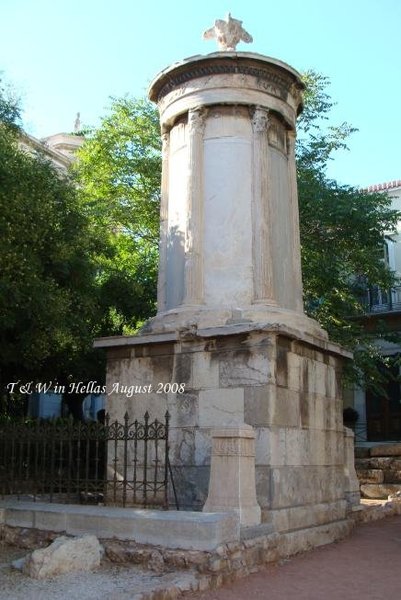 Lysikrates Monument, Lysikrates won the prize for sponsored the theatrical performances in Theatre of Dionysos in 334 BC, he constructed a monument to house it.


Our dinner is at Vitro restaurant that the receptionist at the hotel recommended. 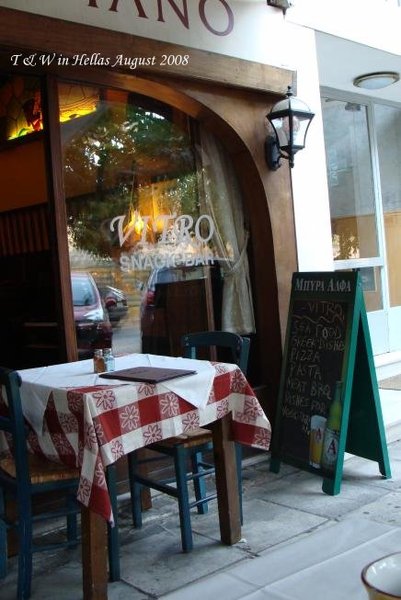 We had a Greek salad, Calamari and Greek sausage, and a tasty dipping sauce that came with the bread. And the price we paid for the dinner was very reasonable.


When we were leaving the restaurant, I heared music came from the base of the Acropolis. 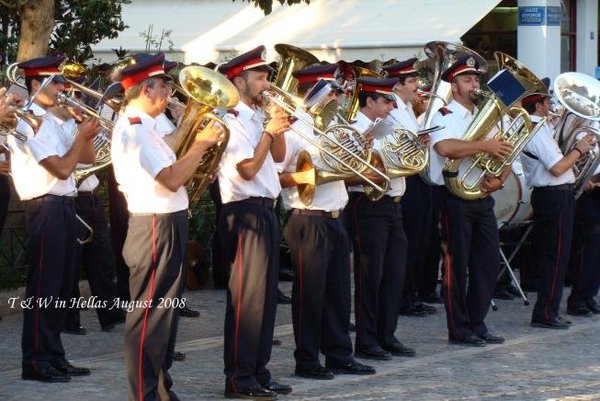 Even now, we still don't why this band played on the day, and we were lucky to be there.


We went back in the Plaka, continued our exploration. 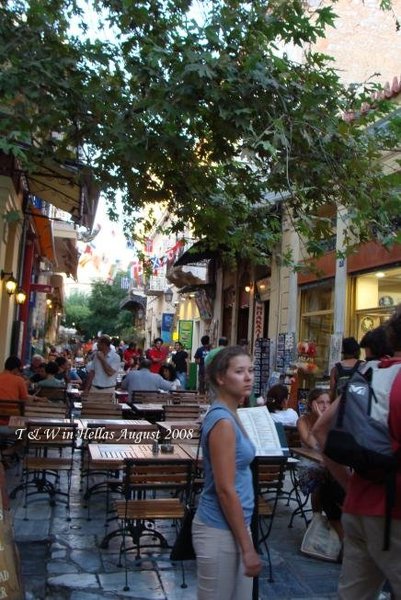 8:00 o'clock, it's the dinner time for Greeks, restaurants were getting busier, and the night fell, lights up.


We walked by Roman Agora, it was closed for the day. 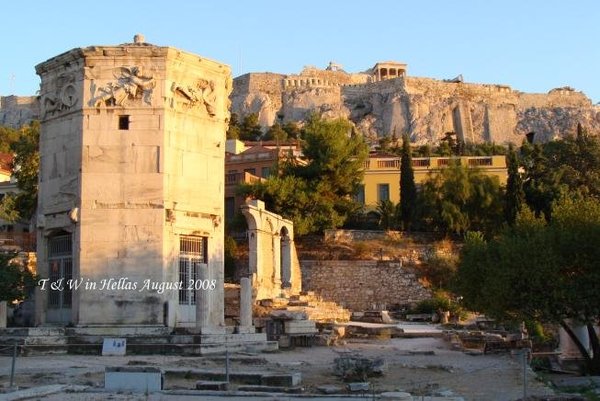 The sunset put on a nice orange colour on the Tower of the Winds and the Acropolis. 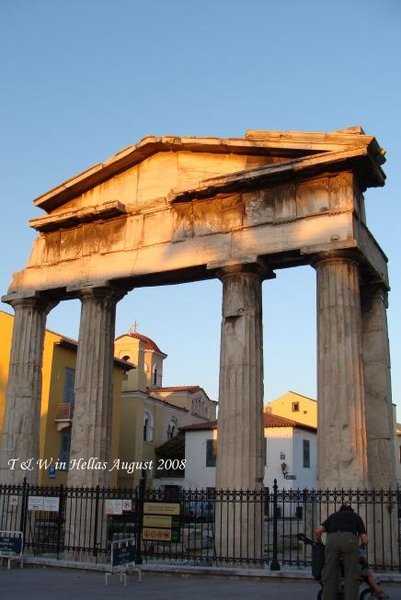 The Gate of Athena Archegetis was also the entrance of the Roman Agora. 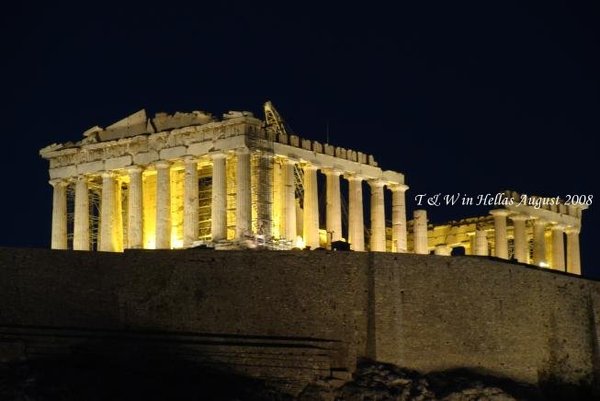 It turned compeletly dark around 8:30 pm, we went on to the roof top of the hotel, to appreciate the Parthenon at night.